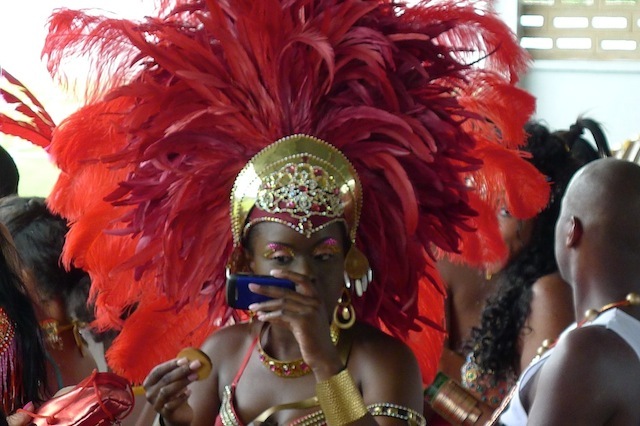 This is an important topic that was discussed on my facebook page today but bears repeating.  What is it that people are expecting when they pay those hefty sums to these carnival bands?
I think its important to get varied opinions, so I asked my cousin (thinkAkil) to Chime in:

I do it most definitely for the experience!

first of all, I’m a guy… male costumes flat out suck (no offense designers). They don’t have all the fandangles and fancy accessories that the female costumes do. So really, for me the costume is the LAST thing I think about when deciding who to play mas with! What I’m interested in is the experience as a whole.

So, what does EXPERIENCE mean to me? Well when I say experience I mean…….well here’s a quick list: 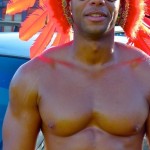 Lets be real. If it were the costume that was important to me, I’d play mas with one of those bands that REALLY put effort into intricate artistic designs, materials and craftsmasnship, and NOT a “bikini band” with costumes made in China. For the money I’m spending, give me the perks! Give me the cool down truck, as a matter of fact, bring back the Heineken indoor club truck. Give me foot massages at lunch, body spray in the bathrooms, people running through the band with snow cones, a martini and mojito truck and any other luxury you can think of! Give me all the things that make me sit down at the airport while I wait on my flight home and think to myself, damn that was awesome!

Now to be clear, NONE of the things above by themselves will make for a great experience on the road, but combining all those, with a bunch of people who are care free and drinking from the same fountain of euphoria that I am, and THAT is the experience I’d be happy to pay for.

The Carnival Connection also chimed in:

Today a Jamaican colleague of mine expressed the importance of a band’s offerings or perks as it plays a role on his decision on who to play mas with.

As a trini playing pretty mas for close to 12 years and more creative mas for some more years, I can tell you that extras, perks, gimmicks and whatever else bands have on offer mean fart to me. In my opinion, this is the difference between ‘playing’ mas and jumping in a band. 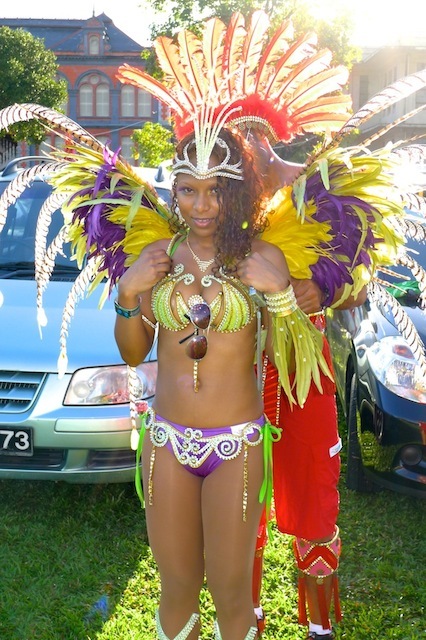 For me when I buy a costume, I don’t buy it because the band has a cool down truck, a massage station, mobile hair salon or even a runner service. What I pay for is THAT costume. THAT costume that gives me goosebumps when I first see it, every subsequent time that I see it online, in a catalogue or in my dreams when I dream of the bess body I’ll somehow conjure up to go with this bess costume.

As someone who was brought up ‘cotching’ on a side street to eat lunch or making friends with a woodbrook resident to use their facilities, the advent of the rest stop is a novel idea but something I can do without if the mayor ever catches a vaps. The ‘wee wee’ truck is also convenient among other things, but personally for me, the advent of the hyper all inclusive band with its 10 million trucks is more of an annoyance than a blessing. Sharing the medium sized roads with 4999 people and 20 trucks is not my idea of a good time. In my times with Poison, even at 8000 masqueraders, I’ve never felt as claustrophobic as I’ve had in tribe with 5000 masqueraders. My reasoning behind it ? The trucks.

The trucks that need to be there to cater to the foreigners and locals who’ve come to jump in a carnival band along with us who’ve come out to play a mas.

No offense, I totally understand that carnival has and will continue to evolve but when people complain about a massage station being non existent or outraged that their isn’t a chocolate and strawberries option for desert, it is totally lost on me. A complaint I always see which I personally find hilarious and saddening as it highlights the resourcefulness (or lack thereof) of the current masquerader is when X person’s favorite drink runs out on truck 5 and they raise hell online the next day. Ask them if they tried any of the other 7 drinks trucks and see what they say …. Lol . So what’s the point? All these services and we are spoiled to the point of helplessness.

While I’m sure even the old time battle hardened masqueraders  enjoy some of the amenities the cream puff jumpers of today love it does bring up the question…should we emphasize the experience or the pure costume and visual arts part of mas?

I for one don’t want a foot massage, but like Randomli, I want to have the options there.  I pay to wine up mi baddi and have as good a time as humanly/legally possible with as many beautiful people as possible with NOTHING interfering.  No lines, no putrid toilets, no stormers etc.  As time goes on I find myself more and more attracted to the pretty costumes but for me, a Jamaican who only ‘adopts’ trinidad one week a year, it’s still all about the party.  If my costume survives Tuesday I did something wrong!

What are you paying for?

3 thoughts on “What are you REALLY paying for?”