We are part way through the carnival dry season, where little to no news on carnival  anywhere can be found (I’m dying here!).  Thankfully Barbados is gearing up for Cropover and Trinidad band  launches should be starting up at early as July!

In the meantime instead of watching the carnival paint dry, we here at lehwego will try to entertain you with fun exciting topics for discussion, like todays topic.  This topic came about from the discussion of this photo. 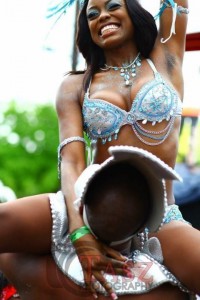 Of course, as you can imagine, there was a firestorm of opinions, mostly negative, about what was apparently happening here.  I was in the area and saw photos from other angles.  No…he did not lose control and decide to swallow her whole, anaconda style.  He was lifting her up, they lost balance a bit and the perspective of the photo just made it look all wrong.  I found it interesting that all the negative comments were directed against the woman as if she leapt on the unsuspecting man while he was on his way to church!
The whole furor raised the question of what part sexuality plays in the carnival experience.  Should it have a part to play at all?

Of course carnival is about culture and comraderie etc. but sexuality does play a part and that’s what we are going to discuss today.  My personal opinion is this.  From a man’s point of view it really depends on you, what you expect and your personal relationship status among other things, but in general carnival is a rather sexually charged affair.

Where does it fit in?

Many men spend the year as quiet Clark Kents, unseen, just another guy in a suit, be it a jumpsuit or 3 peice.  Carnival can be the outlet that a man needs to feel young and vibrant again.  For women the same issues can apply….Do women have mid life crises like men do?  I think so!  In the Caribbean and abroad there are many successful women who to some extent need an outlet to express their sexuality.  This expression can range from batting an eyelid all the way up to “leggo beast!”. Carnival presents the perfect opportunity for that.  Did I mention I love carnival? 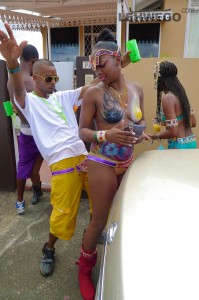 You see, for those two days during trinidad carnival everything changes.  The cultural and societal norms we are used to are literally suspended and new rules apply.
Ladies, what other time or place could a man you don’t know from Adam simply walk up to you and just TAKE a wine?  What other time of year would that man actually get back a wine from the said woman?  Where else would a stush executive who rules her office with an iron fist be seen prancing in a G-string and nipple pasties flinging wine on all and sundry!

During my extensive facebook “research” on this topic I found that many women admitted to taking advantage of the relaxation of the normal rules to flirt.  Some danced in ways that can only be described as “dirty” (I think I saw a woman possessed by the devil on the road).  The overall impression I got was it is a time to do the things you WANT to do but normally would NEVER do.  For men the same was true.  The one thing I did not find prevalent was sex.  No one I asked said they had any.  It was all good ole fashioned fun with none of the wild sex that we all imagine takes place in every nook and cranny during carnival (who started that rumor anyway).

Where do you stand?

Trinidad carnival Monday and Tuesday are a marathon of exhibitionism, narcissism, voyeurism and other behaviors that would be unacceptable outside carnival, and you know what…..WHO VEX?!  Thats why many people go! To taste almost absolute freedom, to express a otherwise hidden portion of themselves.

The secret is to find your (and surrounding persons) limits and abide by them.  ENJOY YOURSELF TODAY, no one has promised you tomorrow:)

HOW FAR DO YOU GO?

7 thoughts on “Flirting, lewd behavior and SEX at Trinidad carnival?”