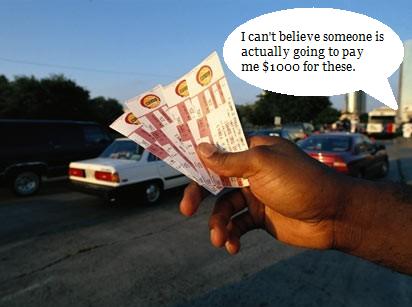 With the sole exception of my Beach House ticket, I was able to acquire all of my fete tickets for Trinidad Carnival through a reliable concierge system (big up The Carnival Connection) with little to no hassle. I imagine that more and more persons are obtaining this tickets in this manner, as opposed to the old-fashioned method of linking your friends in Trinidad. The charge on acquiring tickets is reasonable and the process is smooth and easy. I probably could have gotten the tickets through friends for myself, but I didn’t see why I should have to put them through the hassle when I could do it myself with minimal fuss.

But that’s not quite true. Aside from hiring a service or asking someone “in the circle” to get tickets for you, you could just do the same thing that people have been doing for years – 1) finding out months in advance when tickets are most likely to become available, 2) simultaneously finding out the quickest and easiest manner of acquiring tickets, and 3) taking the necessary steps and making the necessary connections where needed to ensure that tickets are obtained.

There are tried and true procedures, if you act early enough, for getting tickets to any event. People employ these procedures every single year. A lot of the time, it’s as simple as getting in touch with an organiser, sending an e-mail, visiting the headquarters, stalking a website…

Which is partially true. Partially true if you lag and don’t act early in finding out when tickets become available, where they are available and who to talk to about getting them as soon as they are available. But these aren’t really secrets. 🙂 In part, Carnival is something you have to live. If there is a band you want to get into or a fete you want to go to, you pretty much have to be aware of what’s going on all the time and particularly when the season is upon you. Most bands and fete organisers have Facebook pages: of course, organisers will make sure that their family and friends are accounted for before Joe Public, but this is to be expected and there is really nothing wrong with that. Just don’t complain when they open the door to Joe Public and you’re not the first in line because, “connections” or no connections, if you’re not, you have no one to blame if you end up on the outside looking in.

This is particularly true in Barbados. While bands in Trinidad launch earlier and Carnival fete tickets become available early on, between 3 and 6 months in advance, Crop Over bands and fete tickets open up sometimes a couple of months (and oftentimes, mere weeks) before the actual date of the event. Yet, events which are considered “premium” have no problem selling out before you know it.

I got lucky this year, but the moral of the story? Act fast. This is surely the last time I will be scrambling for tickets (of course, I’ve probably said this before…lol).