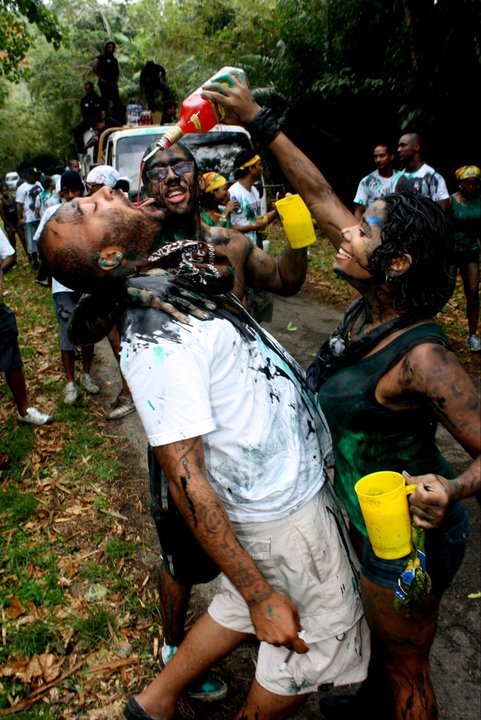 For carnival 2012, there will be one event that i will be looking forward to with a bit more anticipation than all others. Caesars Army Jouvert is that event.

This is not a decision I have come to lightly. I base this opinion on years of observation and field study. My findings have lead me to conclude that for 2012 Caesars army will be better than ever before. Let me explain my concusions.

Back when I first started going to carnival back in 2005 we always made the effort to goto the best parties and j’ouvert was no exception. To be clear, although I love a party that provides all the best amenities that alone means nothing.  My definition of a good party is one that has the vibes, the hype, that difficult to explain feeling where everything else (like fashion, fancy food and expensive drinks) falls to the wayside and you can’t help but have fun.  That is what I am looking for in a fete!

That first year we went to Red Ants j’ouvert. While security was good and the drinks were plentiful there was a certain ….UMPHH(Heh-Hai)…missing from the whole event. The crowd seemed more into liming and looking around than partying. Another problem I had was that when we got on the road the pace seemed more in keeping with a 5k run than a road party. Stops were few and short.

While we made sure to always eliminate bad parties and add new ones to our list every carnival, somehow jouvert never changed. And every year it seemed to stay the same, O.K. but not so good. In 2009 there was a change. One of my crew told me about a friend of hers who was starting a new jouvert band. We saw this as a perfect opportunity to broaden our jouvert horizons. That first year was an eye opener for me in terms of what jouvert had to offer. The crowd was younger and they came to party! After a brief warming up period we hit the road and we partied all morning. We even got to our band a little late monday because of jouvert that year and I didn’t mind at all.  Overall the experience was great but pretty much standard fare as far as j’ouverts went. 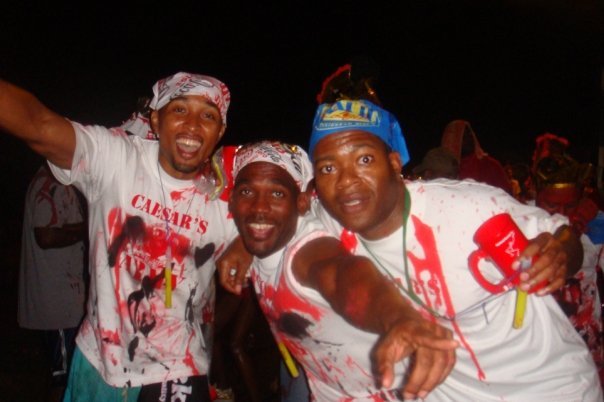 In 2010 we went back to Caesars army again looking for the same enjoyable experience. Unfortunately this was not to be. Stormers took over the band and destroyed the party. The bar even ran out of drinks! This was a year that all involved wanted to forget.

Now,many organisers would simply give up the ghost. Others would just put on the exact same event again and hope for the best. I love that Caesars army went above and beyond to fix all the previous problems and simultaneously bring something new and unique for carnival 2011.

Not just jouvert on Friday but a Friday package that kept you partying from 10pm till 10am the next day.  The package included pick up at movie town, a party bus ride to  blue range or soca monarch and then j’ouvert followed by a bus ride back to the starting point at movie town. 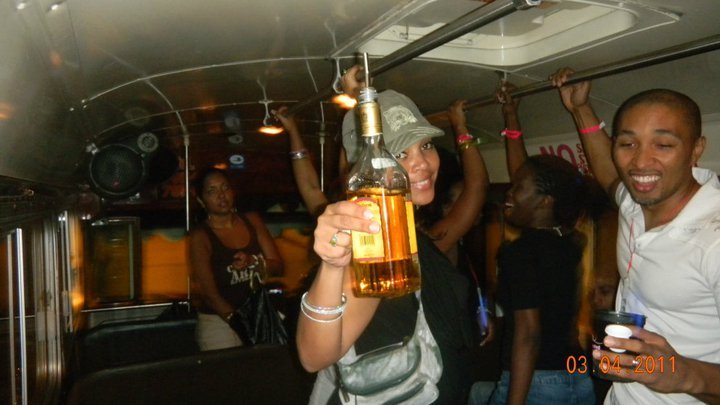 We started at 10pm the friday night with a party bus ride to blue range cooler fete. The army was well hydrated with….well tell the truth I don’t even know what it was…but it certainly burned going down. The bus trip served to build a vibe and camaraderie…my crew expanded from 5 to now include the population of the bus…and the vibes were nice. We eventually reached blue range and set up camp in a corner by the stage (That was the last time I saw my shirt that night). The vibes were sweet and we partied hard. Eventually we gathered ourselves together and hit the party bus again and drove out to a secret location out in Woi Woi (Jamaican term for FAR). We then changed on the bus (still couldn’t find my shirt) and moved to a shuttle bus to be carried to just behind Woi Woi. 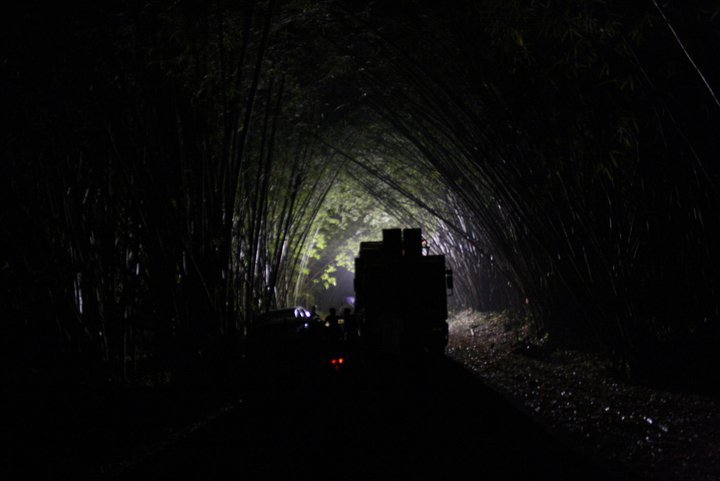 The above picture will live on in my memory as the start of something wonderful. My crew turned the corner to be greeted by girls taking pictures and flinging wine left right and center. Roaming drink generals poured shots directly down patrons throats. The vibes were sweet. As the morning went on the crowd only got bigger and better. No posing roun’ ere’….strictly party! By then end of the road I have to admit I had gotten my moneys worth and more. 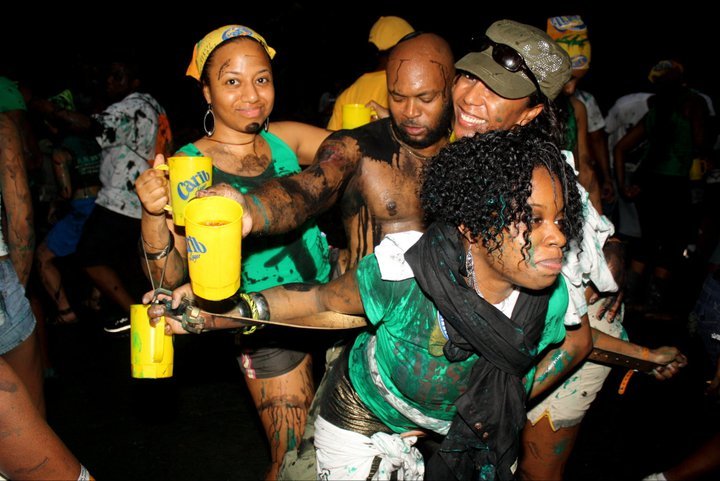 Then they had the water. 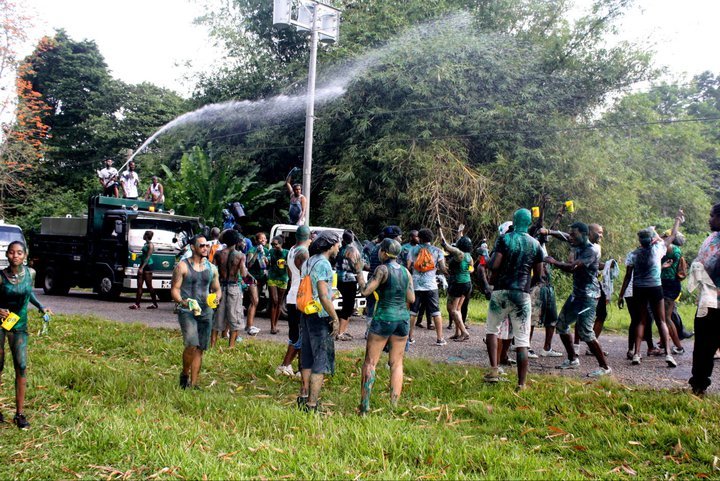 And the live band!

Caesars army moved from another good jouvert band to starting something that is unique and as far as I’m concerned, special enough to be a no brainer for next year.  In my opinion this party has shown the only “innovation” I have seen for my few years going to trinidad carnival.  You have a chance to do j’ouvert without affecting your monday, or, for the navy seals among us it gives the opportunity to do a double j’ouvert.  I think their only problem next year will be living up to the high standard that they have set. Seeing that I have special interest in this one I will do my best to keep you up to date on any news they have for 2012.

I wont be able to make it to crop over but I have a soldier or two that will be able to send reports back to give to you. On a different note, band launch season rapidly approaches. As each band launches i will do my best to give you a mans view of how 2012 costumes are looking.

2 thoughts on “Caesars Army, and why you NEED to jump with them!”