One of the side effects of going to Trinidad Carnival is that you start to follow carnival blogs and join all sorts of groups on facebook. As a result of this, you see all the post carnival fetes in Trinidad that you DON’T get to go to. Having experienced this quite a lot recently, this got me thinking, what’s the difference between a ‘fete’ and a ‘party’?

Now, seeing as I’m not actually AT the fetes in Trinidad, all I really have to go off is people’s reviews, pictures and videos. Clearly these might be a bit biased, but, lets take them at face value. After seeing the photos from josie’s jamishness it became pretty clear to me that the vibe at some of these post carnival fetes is pure, unmoderated fun and madness. The people seemed to care about nothing but but having fun, dancing, drinking, and enjoying the few hours they have at the fete…pure Jamishness.

One might think this was an isolated incident, but then I saw video from the last Caesar’s army Mai Tai… Same thing. The fete seemed filled with people concerned with nothing having fun. No posing, no mingling and no socializing and ‘catching up’, just fun.

Now, here (in Jamaica) we have some GREAT parties. Parties that you look forward to months in advance. But these are the exceptions & few and far in between. For the most part in this humble blogger’s opinion, parties never quite reach the same level of fun and freedom that fetes in Trinidad seem reach on a ‘regular’ basis. The crowd very rarely seems to let loose quite as much. The overall vibe never quite seems to get to the same level of craziness.

Maybe its the commitment?

Here in Jamaica, almost everyone buys their tickets the day before, or the day of the event. Very few people buy their tickets weeks in advance. This (from my understanding) is the exact opposite of what happens in Trinidad. In Trinidad, people buy tickets for parties way in advance. In a sense they’ve committed. Maybe it’s this commitment that makes the difference. They’ve committed to going to the event and making the best of it. To put it another way, Trinis apparently take feting VERY seriously.

The cornerstone of any good fete/party is the music. Here in Jamaica we tend to focus on Dacehall & Hiphop at our parties. Outside of carnival season, soca is a rare treat at any event. In Trinidad however, based on what I’m told, while the musical range is much wider than during carnival, soca gets far more airplay as compared to Jamaica. Could this be the ingredient that encourages people to ‘bruk out’? If you ask anyone, soca fan or not, whatever the event, when soca music starts to play, the energy and the vibe of the crowd changes to what one could describe as pure madness (Jamishness?). 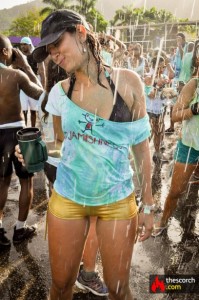 Have you ever tried to keep up with a Trini when it comes to drinking? Let me be the first to tell you, it doesn’t matter if you’re 6ft and weigh 300lbs, you will lose if you try to keep up with a 110lb Trini. You’ll end up stumbling home while the Trini loses all inhibitions and parties like there’s no tomorrow. Guaranteed. Maybe this is the reason why fetes seem to be crazier and more fun?

It could be a combination of all the above, or none at all. At the end of the day though, I think you’d be hard pressed to find someone who has partied extensively in both places that doesn’t agree that a fetes can get crazier, wilder, and way more fun than most parties here in Jamaica…or anywhere else for that matter! But then again, I could be wrong.

What do you think? Fetes or parties?

3 thoughts on “Fete vs Party”