We have been beating Jamaica carnival like a dead horse recently so I think that I will try to get to the heart of the issue with this post and then move on.
We will hopefully have much more cropover coverage for you as well as our usual opinions and posts preparing you for Trinidad carnival 2013!  Take a read below and make sure to chime in with your comments below.   Also make sure to like the facebook page, Share this post with your friends and subscribe to the blog (right side of screen:) 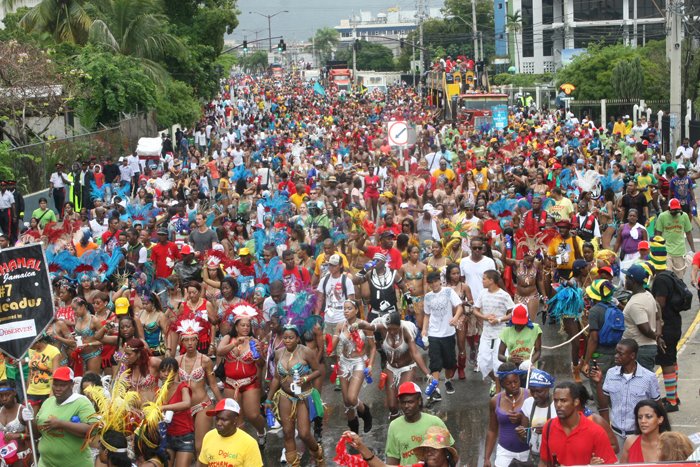 Jamaica does not have a long history  of carnival.  It started here in 1989 and has no ties to any important social or historic occurence.  It was simply an importation of carnival from other islands, primarily Trinidad.  In my opinion Jamaicans look at carnival generally as a large street party/parade on a grand scale.   You can read more about Jamaica’s brief carnival history here.

Where we are now?

Many of you have by now read ThinkAkil’s post on Jamaica carnival and many have weighed in with your opinions.

For the purposes of looking for a path to improvement we will today discuss the problems of carnival in Jamaica.  I want to stress that carnival here is still a great experience and I cannot stress enough the JOYS of doing the double (Trinidad then Jamaica).

My carnival grouses are aimed mostly but not exclusively at the only player in the carnival market in here, Bacchanal Jamaica. 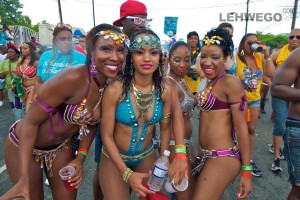 Grouse #1 The poor use of social media.

Grouse #3 Costume problems.  Every year there seems to be some debacle over the costumes.  Last year the advertised colours were not what was given to one section and this year many girls were given “a 6 for a 9” when it came to their bra sizes.

Grouse #5 Elitism.  More and more carnival is becoming the territory of the middle and upper class ONLY.  Frenchmen has several sections and there is even a section “Bacchanal Babes” that require you to fill out a form and send in a photo to register.

I don’t have a problem with Frenchmen, Bacchanal babes and jumping through hoops to get in a fancy section.  I simply feel it is important to create a means for the rest of Jamaica to take part, even one doesn’t have the 200US$ to blow on a fancy intricate costume!

What do we need to do?

So. Instead of simply complaining about what is wrong, I organized several solutions to all the problems I discussed and more.  However,  during my consultations, I was asked to not reveal all my ideas.  I’m hoping that this means that there will be some new players on the carnival scene here in Jamaica.  Who knows.  I feel the next few years will be VERY exciting!

Bacchanal Jamaica, or any new band that may come up in the next few years should try to build excitement before launch with social media. I want carnival here in Jamaica to be the best it can possibly be.  I want the buzz of excitement about upcoming costume designs and events to run the length and breath of the island.  An easy way to at least get the ball rolling in this department is the use of social media.  Social media is free and can get the word out easily and quickly to the very same people who should be the main the target audience for any carnival band….the ordinary working man/woman.  Even without much effort, Bacchanal Jamaica was able to create a buzz about this years costumes.  Properly utilized social media should be able to create a sense of anticipation that brings people, even those not previously interested, to take a look at what you have to offer.

The band launch should have a private press launch but MUST also have a bigger public launch so all who have waited to see the costumes can see them worn onstage to get a good idea of what they look like on a real person as opposed to a mannequin.

In terms of costume problems, I don’t think we should fault Bacchanal Jamaica too much in terms of getting colours that were not exactly as specified or sizes that were a bit off.  I’m sure there are many, many hurdles to pulling off mass production of these costumes especially if there is production done here.  My advice is to simply let people know.  I’m sure that the costume colour change fiasco in 2011 was visible from the moment the items hit the island for example.  Simply let people know.  A status update, a photo.  A warning on twitter…anything.  Even the mighty Tribe have had costume changes a few weeks before carnival.  Tribe called me and told me, and offered me options if I didn’t want to jump in what was offered (ugliest costume I ever wore by the way). 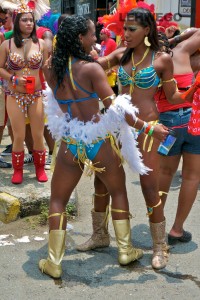 The hype will ALWAYS follow some sections and I refuse to complain about sections that are sold out at launch.  If it’s super important to you to get in there you can make it happen. Wanting to be part of the ‘in’ crowd or group is a function of society that exists everywhere and is not going to go away for a LONG time.  We are all probably guilty of it at one time or another.
Of more importance to me is having a variety of options for each section so all the sections can look good.  If someone wants to have a big headpeice…..why not offer it as an option for all the sections?  Collar….why not?  Wire bra…Sen on!….Tapasexo…..hrmmmm:).  Well you get my drift. You want it, it should be an option, just PAY for it!

On the other end of the spectrum, more affordable options that still look like costumes MUST be persued.
Both UWI Cave hill and Settlers had examples of great costumes that look more like monday wear from Trinidad.  These look better than a cut up T-shirt (the low cost alternative available now) and give a bit of uniformity  and allow one to spend less but still look like they are a part of the band rather than a stormer with a wrist band.  They can easily be designed to fit the theme of the parent section!  This concept of affordable options to allow participation is, in my opinion, an essential part of getting carnival to grow here as it would allow an avenue for the masses to take part.
Reggae would have died out in its early days if it was restricted to only the posh elite parties.  Carnival will be less vibrant in the long run if the man on the street has no means with with to participate.  For all we know we may have hundreds of potential soca artist, costume designers etc just waiting to be exposed to their first carnival.

Byron Lee used to carry more people behind his truck than the eye could see. I know because that’s where my first carnival was experienced in 1997 or 1998 (can’t remember exactly when anymore).  I would venture more people followed his truck than there were masqueraders in the whole of Bacchanal Jamaica for a few years.  If carnival is to flourish in Jamaica this level of participation has to return in some form.  Once the masses are on board, the music from our own artists WILL  (hopefully) follow, and carnival will slowly grow.

So, my rant is over and today I will move on.  I am HOPING AND PRAYING that someone will take the leap of faith to make our carnival product grow.  It will take lots of money and hard work, but in the end it will be worth it.

How can we Improve our beloved Jamaica Carnival?

One thought on “Ideas to improve Jamaica Carnival.”