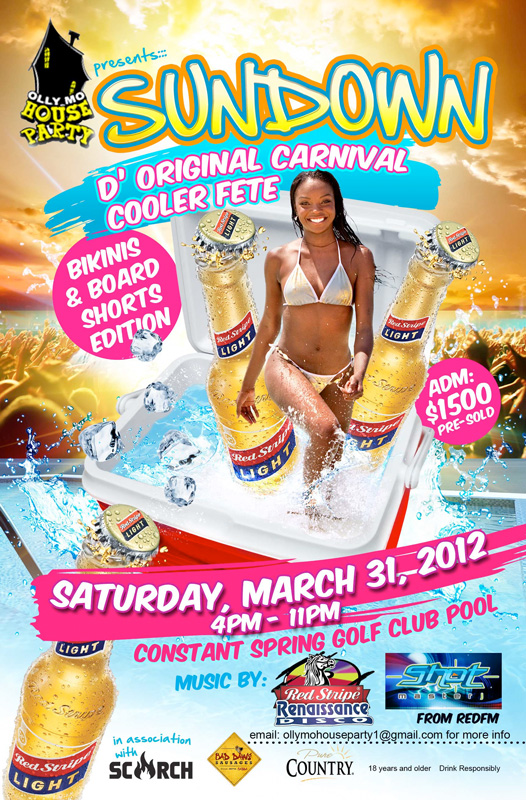 It has taken more than long enough, but at last, someone is trying a Cooler fete in Jamaica.

For a while we have heard about the cooler fete scheduled for Ochi on April 6th.  That fete has been dogged by artists agents appearing on their Facebook page saying no artist was booked and their own claims of being robbed by unscrupulous persons in Trinidad.  In any case they have a huge event planned with various artists and DJ Private Ryan supposedly booked and have only 117 persons on their Facebook page and very little buzz about their event.  I, for one, am wary of travelling all the way to Ochi for that kind of uncertainty.

SUNDOWN TO THE RESCUE!

Well, Cooler fete fans, have no fear.  If it’s a Cooler fete you want then someone will make one happen.

An exclusive group in Jamaica has organized a cooler fete for the faithful.  The flyer went out by email to their mailing list (not even Lehwego got one) and so the event will be rather exclusive.  Expect the best of Jamaica and Trinidad when it comes to the music with Renaissance and RedFM Djs on show.  From what I have heard they really know how to put on a party.  The party is also put on in association with Scorch and so we can be sure they have gotten good advice on how this kind of fete should be run!

Bring your Cooler with drinks and we assume drinks will also be on sale.  The pre-sold ticket price is pretty reasonable at $1500.  Get your pre-sold tickets at Cafe Blue in Sovereign Plaza.

This is a good sign for us here in Jamaica.  The major players in the party scene here are starting to warm up to soca fetes and I expect to see more and more of these Trini style fetes to pop up soon.  I’m also sure that a Jamaican spin will eventually be put on these new fetes as Jamaica develops its own unique carnival culture.

WILL YOU TRY THE COOLER FETE?