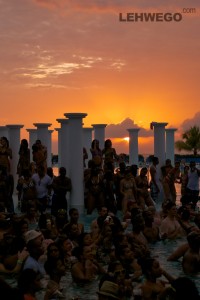 The Day had finally arrived and we hit the road for “Bleu, the Caribbeans largest pool party”.  The first edition had been during the Frenchmens Heroes weekend in 2011 and I had heard many a good thing, so I jumped at the chance to cover this event.

The drive to the Grand Palladium in Hanover takes a while but fortunately the roads have been extensively repaired and its smooth sailing almost all of the way.  This also meant that the Po-Po were EVERYWHERE.  We did manage to wiggle our way out of the speeding ticket with the help of my female passengers though.

On arrival at the resort we were greeted by a portable bar and a young lady who gave us our party itineraries and wristbands.  We took a walk around a small part of the HUGE property to get acquainted with the venues.  To say the property was large was an understatement. The hotel had shuttles that ran from one end to the other or else you would never get where you where going.

The rooms were spacious and reasonably appointed and we settled down to what was to be a relaxing and simultaneously exciting weekend.

The first party was a lingerie party on the friday night.  Guys, I wanted to cover that fete “oh so badly” but unfortunately it wasn’t to be and I didnt make it.  I will ensure that photos of that event show up on the Lehwego Facebook page. 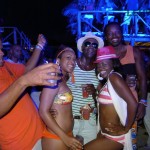 The first party I attended was “Sky Bleu”, the beach party.  The venue was idyllic.  The warm tropical waves lapping on the shore, a picturesque sunset in the background, beautiful women left right and centre.  Ah, this was the life!  The drinks were covered by Appleton and Absolute and as it was an all inclusive  hotel you could easily run to the hotel bar just off the beach for anything else you desired.

The vibes started gradually and the organizers quickly dropped the  “oldies” theme the party was supposed to have.  The Moet and Hennesey quickly loosened patrons waistlines and by the time darkness fell the party was in full swing. THE VIBES WAS SWEEEEEEET!  The crowd was not huge (only 200 rooms were allotted by the hotel) but that made the party much more comfortable in my opinion. 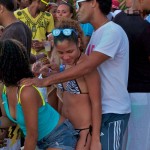 A few hours later we hitched a ride on the shuttle for the trip back to the room (yes, its that far).  I slowly started to get ready for the club party.  My crew unfortunately popped down and went straight to bed.  Fortunately, I am a well trained and elite level partygoer and found myself in the club at about 11:30.

The club was pretty cool but most of the patrons there for the weekend were also in their beds as well.  The troopers who made it to the club with me had a good time  and the hotel staff “playmakers” gave the tourists in the house an authentic demonstration of high flying acrobatic Passa Passa dancing.

Sunday was the big day with the main party “Bleu”.  The entire party took place in one of the large pools at the centre of the property. I thought the eyecandy at the beachparty was good but the ladies took it to another level for Bleu!  The vibes were good off the bat.  The venue was HUGE like most things at this hotel, and this made the crowd look a bit smaller than it was but again it made for better partying in my opinion.  As a man you could see your targets clearly from far and in the bright sunlight. 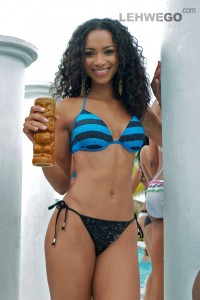 Michelle X and Swappi  took their turns entertaining the crowd.  Michelle tried singing a few less known (unknown) songs during her set and I think that put a damper on part of her time on stage.  Swappi did better with a mix of soca and his version of several summer dancehall hits.  Onstage antics with scantily clad women didn’t hurt either.
This was my first real pool party and did I have a blast:)  I dont think I could really do this justice so I will leave it up to you to judge for yourself by watching the video review below.
Needless to say I will be at the next edition which is tentatively planned for Heroes weekend in October in Ocho Rios.  I will keep you all up to date with any more information on that as it becomes available.

Take a look at the albums on my Facebook page as well.