So as most of you are aware, the launch for Fantasy Barbados’ 2012 theme “Warriors of Africa” was presented on last Saturday, 13th May 2012, at the Errol Barrow Creative Arts Centre. Yours truly was in attendance.

Fantasy Barbados is in its 2nd year and from what has been reported by those who jumped with them last year, the on-the-road experience was excellent – I literally haven’t heard a single bad report, which is very impressive as there are always spoilsports in EVERY band that will find something negative to say.

Nevertheless, as a new band, they are still very much at that stage of their development where they are not yet able to draw persons by simply showing up and launching. Mind you, as a Carnival first-timer, I played mas with YUMA in only its 2nd year and that alone has convinced me that, for the foreseeable future, YUMA is the band I will be playing with. Could Fantasy Barbados be the same?

“Warriors of Africa” was announced as being divided into 4 sections: Mandingo, Amazon, Zulu and Masai. I’m not the nitpicky type so I shall artfully sidestep the fact that I have no idea what the Amazon has to do with Africa, lol. In all honesty, it really doesn’t matter to me, but some patrons did seem to be concerned by a perceived lack of effort in keeping with the theme.

What gave me cause to pause was the very small number of sections. Perhaps, by catering to a smaller number of patrons initially, they are seeking to push the image that they have conceptualised of being the “it-band” and it could well work. However, it is always a risk. In my very limited experience, it seems that people are drawn to large bands, with lots of colour and variety and choice. Time will tell if this risk pays off.

The Mandingo male costume? WIN! This costume gets points points for being detailed without being elaborate, looks like designers put some effort into it and still managed to maintain its functionality. It also seems to have a distinctly African feel to it that is congruent with theme. The female costume appeared to be traditional fare for the most part as far as female costumes go. I liked the headpiece quite a bit. Could have been skimpier though… *hint*hint* 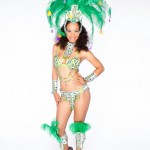 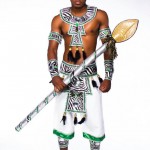 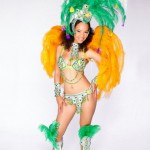 Whether it’s in line with the theme or not, this is another nice costume for the men and also for the women. Again, what impresses me is its simplicity in design, with attention to detail. This is a costume people can jump and get on bad in and still look good in as well. The headpieces are quite innovative, can’t say I’ve seen anything like them, at least not in recent years. 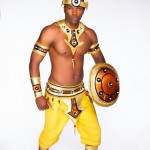 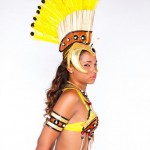 Impressive male costumes that were functional as well as stylish was a common trend throughout the presentation, so I will skip straight to the female costume, and let me say this…

IT IS WELL, WITH MY SOUL!!! IT IS WELL, WITH MY SOUL! Putting aside the fact that the model of this costume is a tall glass of water on a hot day in the desert, this costume is still hot. This is one of those sections where I would jump in it just because of the female section. Because when costumes are that nice (and that exposed), women go in the gym with the mentality that, come Kadooment Day, they must look like Goddesses on the road.  The model had onto hold onto her headpiece coming down the runway, but I suppose there is time to figure out how to make the headpiece more stable. That wire bra will have men dazzled on the road…

There is also a backline for the females, which looked good too. Did I mention that the male costume was nice as well? 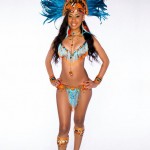 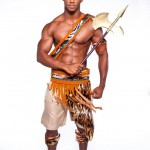 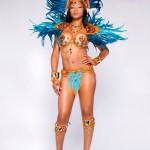 This was the male costume I liked least of all. It was simple like the others, without the finish of the others. Something about the colours also turned me off from it. It is pretty much you everyday run-of-the-mill male costume, you know, the type you pay for just so you can get in the band to get some drinks and wuk up on some bumpers.

The female costume appeared a little overdone…it was extravagant to be sure, there just seemed to be a lot going on and besides being a bikini, it didn’t scream out sexy and edgy like Zulu or even Amazon. Maybe the lack of a wire bra and the simplistic bottom hurt its appeal. It did, however, have a lot of feathers and women do love their feathers. Nice colours As well. 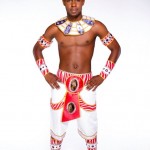 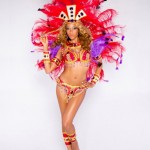 The presentation overall went well, despite a few delays and hiccups here and there. The launch itself was quite well attended, indicating that many people in Barbados consider Fantasy one of the bands to watch for Crop Over and they are very much an option for me to consider. Of course, the season is yet young…